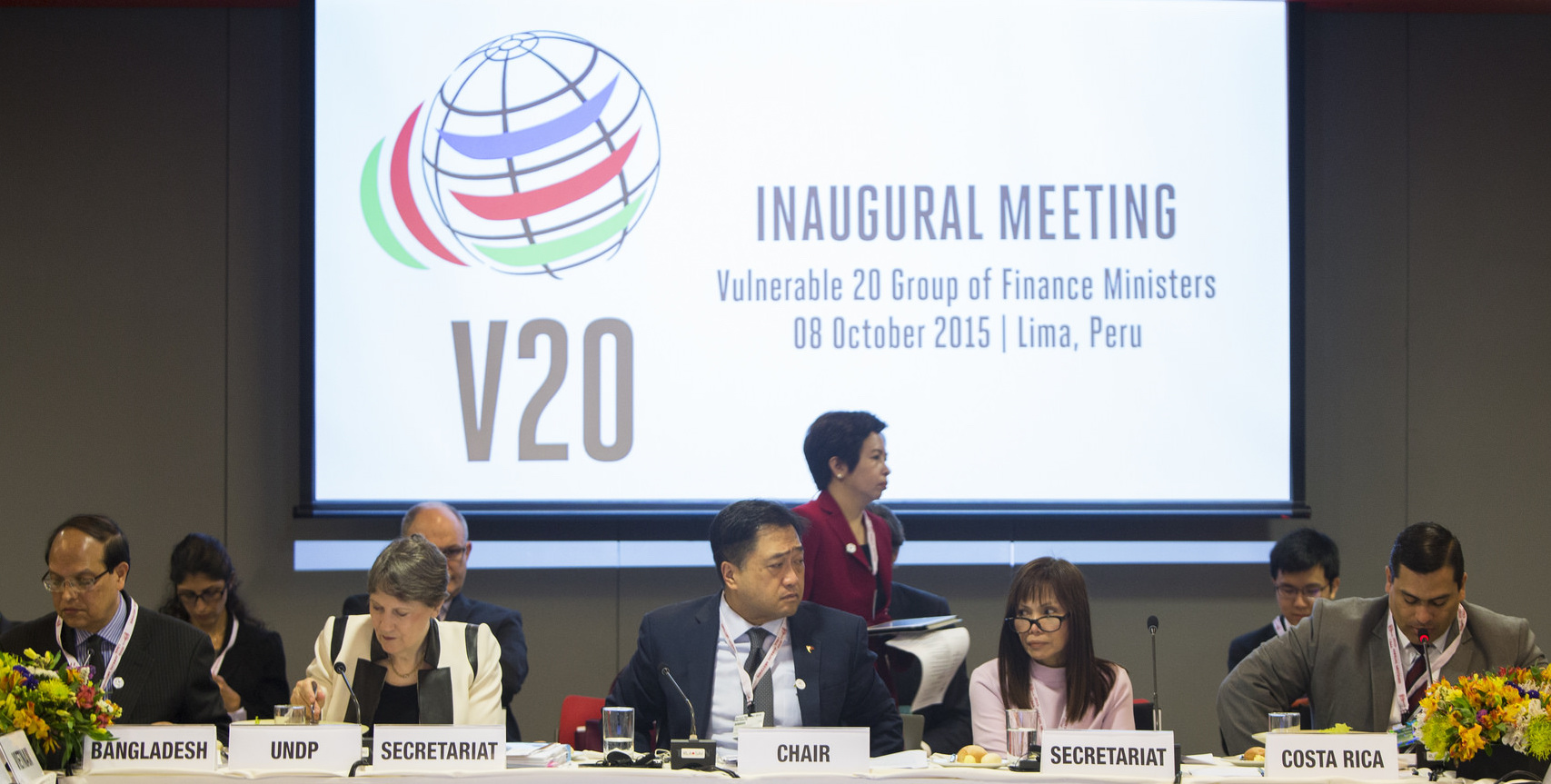 8 October 2015, Lima – Finance Ministers of the Vulnerable Twenty (V20), representing close to 700 million people threatened by climate change and spanning world regions, held their inaugural meeting on 8 October 2015 in Lima, Peru. They announced a series of actions to foster greater investment in climate resiliency and low emissions development at home and internationally.

In its first statement the group called the response to climate change a “foremost humanitarian priority”, with the V20 committing to act collectively to “foster a significant increase” of public and private finance for climate action from wide-ranging sources, including international, regional and domestic mobilization.

“In the absence of an effective global response, annual economic losses due to climate change are projected to exceed US$400 billion by 2030 for the V20, with impacts far surpassing our local or regional capabilities,” said Cesar Purisima, Finance Minister of the Philippines. “Here in Lima, we unite for what we believe is the fundamental human rights issue threatening our very own existence today. Global climate action gives us hope that we can still see a future free from the most devastating effects of climate change.”

Finance Ministers decided to develop and apply innovative fiscal measures. They voiced support for an international financial transaction tax to aid the mobilization of additional resources for the fight against climate change. They also called for improved access to international climate change finance for adaptation and mitigation action, the fulfillment of the $100 billion commitment to the Green Climate Fund, and acceleration towards a 50:50 balance in resources mobilized given prevailing shortfalls for initiatives to adapt to climate change.

“This is not a typical group of major economies. Instead we represent countries put at high risk by the economic failures to address climate change,” said Jose Francisco Pacheco, Vice Minister of Finance of Costa Rica, calling the event today in Lima “historic”. “We have decided to work together to ensure we are not made victims, but do everything we can to contribute to a resolution to this crisis.”

Dr. Atiur Rahman, Governor of the Bangladesh Bank, added: “We want to the world to know that we will not overlook the perils that our economies have been placed at due to the shortcomings, particularly of action by major economies. The world also needs to know that working together our vulnerable countries are doing everything in our power to bring the climate crisis under control, and we won’t relent until we’ve succeeded in our ambition.”

Finally, V20 countries committed to develop or improve their financial accounting models and methodologies to enhance accounting of climate change costs, risks and response co-benefits in all their forms, while seeking a new international partnership to help realize the group’s aims.

“Financial constraints put up serious barriers for climate action and expose millions to disaster and hardship. We believe the V20’s vision to deploy innovation in finance, based on shared experiences, has great potential to knock down such barriers” said Helen Clark, UN Development Programme (UNDP) Administrator.

“The world needs stronger voices from developing countries to draw more attention to their great needs for investment in fighting the impacts from climate change,” said World Bank Group President Jim Yong Kim. “This new group of 20 countries, led by the Philippines, will play an important role in pushing for greater investment in climate resiliency and low carbon growth at home and internationally.”

The V20 was created to promote climate finance mobilization; to share and exchange best practices on economic and financial aspects of climate action; to develop and implement improved and innovative approaches; and to engage in advocacy and other joint actions.

A Working Group of the V20 commenced immediate follow-up to begin implementation of the first Action Plan, progress on which will be presented at the UN Climate Change Conference at Paris (COP21) later this year. The V20 statement said COP21 must deliver “an agreement entirely consistent with the non-negotiable survival of our kind,” while highlighting the significance of a strengthened below 1.5°C temperature goal.